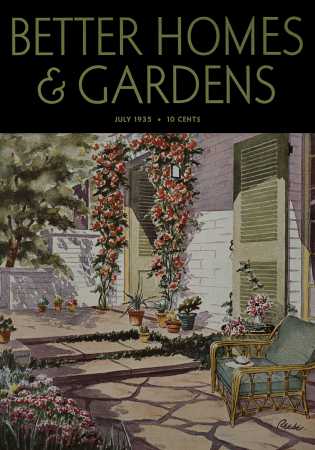 Across the Editor's Desk

GEORGE did it. You may remember that J. Horace McFarland wrote, for the October issue last year, a story entitled "Let George Do It," showing how difficult it is to beautify a city when people are forever "passing the buck."

"AT HALF-PAST dusk of a summer day," says Nick, "it's time to rest a bit. And the place? Our own small veranda!" So in the sketch you see him screening our porch for very pleasant sitting. Nick and our odd-jobs carpenter made the screens in our garage. (Or, ask tor price quotations from your millwork company for screens to specifications!)

THE Diary OF A PLAIN DIRT GARDENER

July 1 Sunday, and walking about, I see that some of my annual seeds, sown the last day of April in that big bed, are just coming thru the ground and those that are thru haven't made much growth yet. We're having a drouth-- a terrible one.

They All Loved Good Food

TO HAVE entertained Caruso, Kipling, Sousa, Madame Melba, "Mark Twain" and others of the world's famous is a rare experience granted to but few fortunate hostesses. Mary Warren, in these intimate glimpses of fascinating Belfast, pictures delightfully high-light moments from her memories of these well-loved men and women who dined with her on the Irish Isle.

We Invite Everyone to Use Our Garden

"GOOD morning, Garden Lady." I lifted my head from the tulips and daffodils I was removing from their early winter pit to see my old friend Jennie McLeod coming in our garden gate. I had not seen Jennie since she had left to tour Alaska.

WHEN you and I were very young copper was our first love among the metals. It was the first metal, in fact, of which we became sharply conscious. Its chief magic was that, in the form of a bright, beautiful, glittering, newly minted copper cent, it had the mysterious property of being exchangeable for a stick of peppermint or wintergreen candy striped like a barberpole and tasting as no candy has ever tasted since.

Flocks of Phlox You Shouldn't Do Without

WHATEVER we should do without phlox in the July garden, I can't imagine. It takes so little ground space all spring, then gives such a wealth of color just when and where we want it, for a choice planting of the better garden phlox surpasses even the most enthusiastic catalog descriptions.

How to Freshen Out door Furniture

WISH you could see some of the repainted porch and garden furniture in our neighborhood. It looks like new, and is so very decorative!

There Are TRICKS to Cool Homemaking

PERHAPS it's the bubbling thermometer or the humidity, but it's a certain thing that these limp days our cleaning schedule has lost its zest.

A fine old family's decay begins when it postpones mowing the lawn until the annual vacation visit of its second-best son-in-law.

THE Question BEFORE THE HOUSE

MY hardwood floors are scratched and worn. They have been revarnished three or four times and putting more varnish on top of what is there now will not improve them, I'm sure. Is there some way this old varnish can be taken off without its being such a hard, messy job?

TRAVEL bulletins and vacation plans are tremendously busy these days supplanting seed catalogs as favorite family literature. It's going to be great fun to be lazy for a while after all the digging of last month. But there are lots of ways of relaxing. We can loll and think of all the ambitious projects to be accomplished next fall. Or we can still loll luxuriously-- and at the same time dip into bits of porch or beach pick-up work to bolster up our alibis.

THINGS have happened in the art of saladry. Almost overnight a new technique has flashed upon the scene, which creates in the salad course a memory to toy with.

When Children are Naughty

MILLICENT wasn't a bad child exactly, and yet she wasn't as good as she ought to have been. She wasn't sick, but she wasn't sturdy and blooming. There was nothing seriously wrong, yet her parents were concerned because they could see that neither was everything quite all right.

You Can Have a Gardenhouse This Year

It's Fun to Bud Plants

WHEN I tell people I have 10 kinds of apples, 20 kinds of pears, and 10 kinds of plums and prunes, which give me an ample fruit supply covering virtually the entire fruiting season, they wonder how I can have them in such a small place.

It's July, So--Water, Mulch, and Stake

THE garden in July gives luxuriously and asks so little. At no other time will it present so alluring a retreat to cool, green depths and fresh foliage fragrance. All it asks is a little thoughtful attention that is easy and pleasurable to give. It wants watering, mulching, and staking-- activities that are so interesting they are really fun.

ALONG THE Garden Path

AT THE age of 8, Carl von Linne, who in later years was known as Carolus Linnaeus, set apart a portion of his yard which he called his botanical garden. His interest in plants increased year by year, until finally he has become the great godfather of botany. Writers thru all the years had called each plant by various names, but in Linnaeus' hands he gave each plant one name and set the custom, among other things, of naming plants for people.