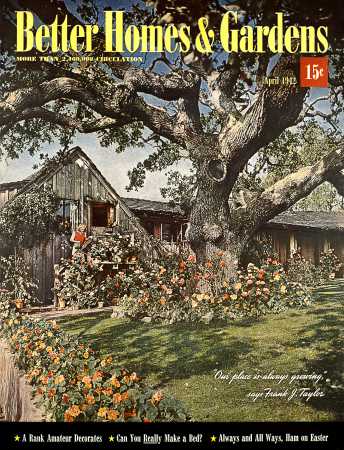 SPRING faces the future and forgets the past. It is the season of hope. Its new green is a shroud for the dead blades of last year's grasses, forgotten, and covered by the new life throbbing and pushing toward the sun. Somehow it seems that this life that swells and glows on every inch of ground is better life than last year's: that there will be brighter and larger flowers on every stem, this year; that the fields will be greener, and the harvests more bountiful.

THE DIARY of a Plain Dirt Gardener

April 1 No fooling about it, this was a damp, dark, windy, dismal day. But I forced myself outdoors. First job was the electric hotbed, already made ready last month. Here I sowed rows of vegetable seeds-- cabbage, tomatoes, broccoli, cauliflower, and sweet peppers.

"I'M A push-over for little houses that nestle and look as if they'd been lived in for years," Jule Holley of Los Angeles confessed to me, by way of an alibi. You see, she'd bought just such a house one fine Sunday afternoon, when all she'd set out to do was to rent one.

READY for planting in your garden this spring are a dozen new varieties of chrysanthemums propagated particularly for endurance against frosts and sudden freezes and thaws. These mums, prize of six years' breeding sponsored by the University of Chicago, are the first released by the university to the home gardener.

I'm a Fugitive From a Dustpan

THERE'S one thing I just don't understand about women. Wait a minute! I guess I'd better start this article all over again: There are a whole lot of things I don't understand about women, and one of them is why they always speak of "spring housecleaning." Anything that starts on the morning of March 22 and ends at midnight on March 21 the following year certainly doesn't deserve to be called "spring." Any more than what they do to a house deserves to be called "cleaning." Any more than what's left of the house after they finish deserves to be called a "house."

How to Grow More Vitamins Per Row

IF YOU'RE an old hand at growing flowers, you'll find vegetables relatively easy except that vegetables require full sunshine, good soil, and a much earlier start in the spring than the average fellow gives flowers.

Two Homes Get Their Wings

HOUSES that should be setting altitude records in living satisfaction have a way of becoming earthbound, which is our way of saying dull and uninteresting. Sometimes they're commonplace because they're callow young things with an unfinished air, and sometimes because they've fallen into a rut with age.

If You Want Good ROSES

SUCCESSFUL rose-growing is neither easy nor foolproof. But there is no mystery about it either; no obscure secrets.

It's a Yankee Dandy!

IN THE heart of New England-- just where you'd expect to find it-- is this red-shingled Bildcost Gardened Home that does the old Yankee traditions proud! To be more exact, it's in the Wilmot small-home development, Hamden, Connecticut (just a stone's throw from New Haven). The Harold Beechers call it home.

Our Place is Always Growing

WE WERE first bitten by the bacillus hill-billicus one drowsy spring morning a dozen years ago. We'd wandered onto this hilltop with a bagful of cherries and a picnic lunch. It was April, and the wild oats were knee high. The wild mustard, the oaks, and the warm earth conspired to fill the air with a heady aroma. As we sat eating cherries under the great blue oak, the idea bacteria began to ferment into daydreams. They went something like this:

I'm a rank amateur, but did I have fun decorating!

SOME folks weave their home-planning schemes around their hobbies, their heirlooms, their weekending friends, or any of a score of other things important in their lives. But my husband and I built, furnished, and decorated our home around color symphonies, comfortable living, a growing-up boy-- and last, but not least, my hobby for sewing.

Slip a Gay One Over on Your Furnishings

The Garden the Beetle Built

AS THE Government ranger-naturalist volunteers to take you for a Nature walk, perhaps along an ancient Cherokee warpath or on some trail once trod by Daniel Boone, the fascinating Nature bath begins. You're now on top of a colossal mass of stone, 65 miles long, which was thrust up from the sea even before the pterodactyls, dinosaurs, and such-like monsters fluttered, waddled, and wallowed over the globe, and millions of years before man made his first appearance.

MY HEART belongs to begonias. It's been so ever since I saw them last summer in the famous Robinson's Rosecroft Begonia Gardens, at Point Loma, California. They're as color-thrilling as a cathedral window. Their leaves are like fire against smoke; flashing red against deep green. Some have gray-green foliage sugared with silver and veined with sherbet pink.

GREETINGS, fellow-members of the Ancient and Honorable Order of Antiquers! All set for another field trip after more antiques to give a fillip to your domestic scenery?

How to make a Bed Right

BADLY equipped, badly made beds probably are the cause of more ornery breakfast-time dispositions and mid-afternoon fag than almost any other factor in this hectic, ditherfilled life!

OUR whole neighborhood was much pleased when Mrs. J. Worthington Smythe was persuaded to install a reading light beside what is laughingly known as Mr. Smythe's easy chair (an antiaue the Mrs. picked up for a mere ditty).

"WHAT cute evergreens! They seem to be made just for your little place," visitors said when we moved in in 1937.

Peter, Eleanor and I Face the War

What's ahead for the American family? No one knows, but we can expect it to be plenty tough. Personally, I've quit worrying about how tough it's going to be. I've got two swell children, and with their help, I know this family can see it thru.

It's the Little Things That Count in Home-grooming

A HOUSE is a lot like a woman. It glows and sparkles when it's loved and cared for. But just like a woman, it loses its freshness if we neglect the daily details of grooming. Many an otherwise charming room is spoiled by something as trivial as yellow leaves on the ivy or tarnished silver candlesticks.

WE'VE a set of pink dishes to thank for a completely delightful new dining-room! When I first laid them out on our dining-room table I could have wept. They were choice and old, and by comparison the room was a horror. Woodwork was pine, varnished almost black; walls were papered in ugly tan; brown and white chintz draperies did nothing for the nice wide bay; and a kitchen pass cupboard in one wall, with a solid door, was a sore thumb on our one big wall space.

HOME is where you do your living. You should never be self-conscious about it or in it. No stick or stone should survive which isn't planned and placed for your family's comfort and convenience. But that doesn't mean an exhaustive round of furniture-buying and a sheaf of bills inches thick.

Dig Dinner From Your Flower Border

the man next door

Among our neighbors home life seems more precious than ever since the war began. We aren't letting the family interests grow meager, for home life is what we're fighting to save. The baby's prattle is more important than the tyrant's roar.

We Grew Up Together

THERE are five of us: my husband and I, our two teen-age sons --and our home. It may sound strange to have a house (and an old one at that!) included in the family. But our house is one of us, for we've grown together thru the years.

WHY VITAMIN C? Because it helps in the development of sound teeth; helps to keep mouth and gums in good condition; helps to prevent anemia, to strengthen blood vessels; jells or solidifies intercellular substances; helps to keep adults feeling and looking youthful.

Pure gum spirits of turpentine is the original, dependable paint thinner. It possesses fine standard qualities for quick reduction of the paint, penetration of the wood, and proper drying. It gives a tougher, more elastic, and longer-lasting paint job.

It's a Living-Room Now!

THE builder is said to have put a living-room in our house. We wouldn't know, for no member of the family ever lingered there long enough to verify the rumor. Among the things that discouraged us were ugly steam pipes in three of the room's corners, an open stairway in the fourth corner that caught dust rather than admiration, two ungainly radiators (the one under the double window we'd hidden with the sofa, but the other was shamelessly spread out at the foot of the stairs), and old-fashioned, sectional glass doors that led to the porch.

Mister, Can You Carve That Easter Ham?

HOUSES get dirty faces just like people! When they do, it's time to reach for the scrub pail and ladder, for a good old-fashioned scrubbing is in order.

Grow Herbs to Spice Your Dinner

WHEN you go into the foods store these days to replenish the family larder, you're likely to find only the cheaper, less exciting cuts of meat within the budget. And yet you want to keep your meals as interesting as ever. This calls for smart seasoning, smart use of herbs.