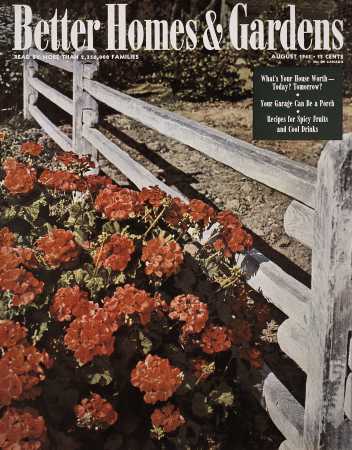 How About the Other Fellow's Lot?

"THERE should be a law," said an acquaintance, "against a guy being that lucky!" He was referring to a man who, with no outstanding superiority in ability, had been appointed to a position to which the speaker had aspired.

STRAWBERRIES--Quickest fruit crop you can grow

SPRING planting is preferred for both classes of strawberries-- the standard or June-bearers and the "everbearers," which will soon be starting to set the first of their delicious, big, fall berries.

The Man Next Door

Some Americans have become a bit skeptical about the reputed skill of the French as great cooks. They can't seem to understand that even a great cook can't do much unless lie has something to cook.

THE DIARY of a Plain Dirt Gardener

Aug. 1 Woe is me-- no rain to speak of since early June. Things are scorched and burned and some dying or even dead.

Is Now the Time to Buy or Sell?

THE major's pregnant wife phoned him at the Pentagon. She was so excited they called him out of conference. "Hurry," she said, "I think I've found something." He grabbed his cap and ran. It was over in Maryland, painted white, and it had four bedrooms, two baths, and a nice yard. "Eighteen thousand," the owner said. "My God!" the major gasped.

Here Are the Answers

How to Plant Your Front Door

WE FURNISHED IN THE Southwest Manner

HALFWAY around the world on a lonely Pacific island so rocky and sterile that it can't support a pigweed, your son this moment may be eating fresher vegetables than you have on your table, vegetables so juicy and flavorful that they make your own look anemic.

THE most unusual high school in the United States is the Veterans' Institute, a division of Cass Technical High School in Detroit.

Cool Ideas to Adapt or Adopt

WHY stand for it? Having your garden take on a half- baked look, that is, the minute the thermometer boils up a bit. Why not sit right here with these pictures until you figure how you can create some cool-looking corners like these? All you need do is approach the problem logically, fan your imagination, follow five rules.

Your Garage can be a Summer Porch

ANY room in your home, or any shelter connected to it, falls below par value if it can't be put to more than one use. By the same set of rules, it's worth only a fraction of the dollars you've put into it and of the space it takes, if you can't realize enjoyment or utility from it all the year around.

Fit Your Dining Space to the Family

$70 IN PRIZES FOR Spicy Pickles and Frosty Drinks

TEN dollars and a tip of our hats to Mrs. P. A. Rich of Framingham Center, Massachusetts! She's first place winner in the recipe battle of Spicy Whole Fruits or Vegetables and Tall Chilly Drinks touched off last January. Her 3-in-1 pickle recipe, "Sweet Pickled Crab Apples, Pears, and Peaches," uses one simple method for all three.

Along the Garden Path

For Your Compost Pile. Drive a stout post at each corner of the space to be covered by the pile, then take some old wire border fencing, 12 or 18 inches high, and stretch it around the posts, using a wire staple to fasten it to the post at each corner.

Steps to Success WITH A BOWL OF FLOWERS

Napkin clips solve many a hostess problem in a pretty and practical way. They clip on plates and are first aid for buffet meals or for small table areas. At barbecues or picnics they'll keep your paper serviettes from the ruffling breezes. They're made of clear lucite which needs no extra care itself and looks graceful with any china pattern.

AUGUST is the time for turning out something new for the garden. An outdoor fireplace can well be the center of family gatherings. The simplest type is just a hole about 6 feet square and 6 inches deep. This is lined with firebrick set on edge and built up 6 inches above ground level. A coping of fiat stone finishes off the top and a terrace of random-pattern stone is laid around it.

Ice cream mix. Water is all you add to this powder to make a rich, smooth ice cream. Mix just twice: once before and once during refrigeration. In about 40 minutes' freezing time, you've dessert or the basis for a sundae. In chocolate or vanilla, 5-oz. package of Tis Ready Mix for Ice Cream makes 6 regular servings.