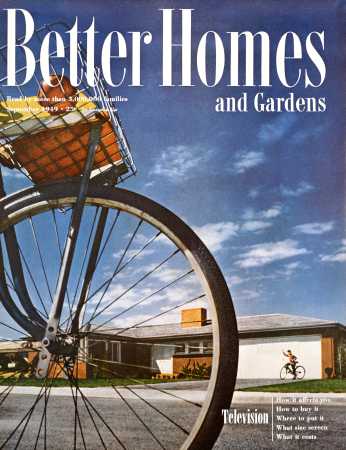 How to pile up a little money

If you are an average American, you are probably making more money than at any other time in your life. With prices no longer rising, you should be able to save more than ever before for that proverbial rainy day. But regardless of how much or how little you are able to save, you are anxious to put your savings to work most effectively for your future. To do this you need a savings plan or program.

See how to get a better home

More drama from a bay window

In the past, it has been all but impossible to kill many woody plants by chemical means. Now it looks as though a combination of weed killers 2,4-D and 2,4,5-T will solve that problem. I have tried it out, mixing one part of the combination with two parts of kerosene. A single quart of the mixture killed a 60-foot catalpa, with enough left over to kill a 30-foot ash. The mixture was painted on the trunk at ground level, and then more of it dashed on the trunk so it ran down into the soil (The trick is to attack the plant at its weakest point, where it enters the ground.)

How good an amateur architect are you?

Planning a house isn't too hard if you don't have to worry about space and cost. But few of us have that much money: We have to fit every inch.

An ideal home-heating plant would provide a constant flow of warmth, and would avoid the undercooling and overheating cycles common to many furnaces now in use.

The new pill that may STOP your COLD

Up to now, the only positive way to prevent a cold has been to keep far away from people who have them. This fall and winter it may be different. Your family has a new chance of knocking a cold in the head before it gets started. You may be lucky enough to go for months without anyone's having to reach for a handkerchief. The odds are good that you can even crack down on the infectiousness of colds, which so often run like a delayedaction fuse through the whole family.

Television: Buying and installing it is fun; these ideas will help you

YOU might just as well listen now even if the television networks haven't come to your town, for the way they're spreading it won't be long.

Color till the snow flies

If you like a real bargain, take a flyer in the new garden chrysanthemums. Buy budded plants within the next few weeks. Set them in a sheltered corner or below a wall like this.

A house that's fun to live in

The James Hoyts of Pasadena have a home that's fun to live in. That quality is the first thing you notice as you steer your car onto an asphalt court that has room for several automobiles and keeps your feet out of the mud.

August gardens are full of bloom. Now more than any other time of the year you have all the flowers you need for lush indoor arrangements. Bring your garden flowers inside and accent every room with fresh summer color.

When you QUARREL with your wife

Here it is 9 o'clock of a workaday morning, and I have just suffered a tongue-lashing from the one person on earth whom I love most. It ended with the car door being slammed hard enough to crack the glass. I shall not see her again until 5 p.m. By then she will have calmed. She may still have an embarrassed quietness of manner, but if I ignore that and speak casually of commonplace things, she will be normal again by dinner.

How to insure your spring color

You can insure next spring's color now. Will you want nodding yellow daffodils along the rim of your lawn? Sweet-scented hyacinths? Some purple, gold, and lavender crocuses pushing up in jolly little huddles while Old Man Winter still hangs around?

It will always fit your family

It's a simple matter to build a house that will fit your present family. But how will that house fit a family the size yours may be in 10 or 15 years?

If you want a new functional home, but are saddled with a 25-year-old model, take cheer. The Harry Swansons of Portland, Oregon, were in exactly that situation.

The man got off an overnight train in Des Moines. He hadn't slept much; the idea had kept him awake. He walked into the editorial offices of Better Homes & Gardens and introduced himself. He was Jim Reifers, and he operated a medium-size furniture store in Lafayette, Indiana. That wasn't important; what was important, he said, was this idea that he had.

Cooks' Round Table of Endorsed Recipes

$70 for appetizer and ham recipes

Your best ways of fixing ham and appetizers are wanted. Cash for 21 cooks is waiting-- $70 in all. First prize is $10; 20 others are $3 each. Top winner and seven others will be published in Cooks' Round Table next April.

What a deep well cooker can do for you

How to be happy at the dinner table

Soup's on-- and so is the war... "It's a rotten shame a man can't eat dinner in his own home in peace and quiet!" roars Henry Thomas, pushing back his chair and stamping off in search of something to soothe his ulcers and his inner tension.

How to remove floor scratches

Has your upholstered furniture lost its trim tautness? Perhaps that slightly pendulous appearance has already given way to an alarming bulge. Worse yet, are sagging springs thrusting their coils into you?

Don't shut out your childless friends

Joan and Betty were bosom pals until last year, when Joan became a mother. A few days ago, Betty confided her hurt and bewilderment to me.

They'll walk when they're ready

Watching a baby grow is like reading a continued story-- you can scarcely wait to see what happens next.

Want to do more jobs with less effort?

Want to cut down on elbow grease and step up accuracy and production on home-maintenance jobs? The power scroll saw is a good place to start.

Your dog and mine

Although it's rather common, ear canker is extremely painful and hard to treat. Best way to prevent the ailment is to start early with weekly or biweekly ear cleaning. Use blunt sticks, tipped with sterile cotton swabs dipped in alcohol, not soap and water.

Some people refer to it as informal living or comfortable living; others just call it living country style, but it amounts to the same thing-- it's living without pretense. It's a way of life that appeals to all kinds of people. You don't have to be rich to enjoy it, but there are wealthy people who think it's the only way to live.

It's easy to finish a wall with wood

Tongue-and-groove lumber has several advantages that recommend it to the amateur carpenter who wants to panel a wall:

Can you build your own home?

Can you build your own house, the way we did? Yes, go ahead. The actual construction takes only common sense, a skill with tools you can acquire as you go along, and enough drive to carry the job through.

Tony's mother felt she would scream if she didn't get some time to herself. "I'd just like to go in my room and shut the door and not hear or see anyone!"

Claremont builds a place to play

The people of Claremont, California, learned what a city can do when it desperately needs a park. The people themselves go out and win elections, raise money-- and then do most of the work in making the park.

New lines will give your home new style

New furniture for your home, new toys for the kids-- would you like to make them yourself? It's easy when you use a pattern-- just trace on wood, saw, and assemble. For a complete catalog of more than 100 woodworking projects, order the Easi-bild Pattern Book. 20 cents.

Our house grew UP

The best way to answer questions

"Mom, what makes it rain? Is there really a man in the moon? What's gravity?"

How to make a sofa bed

Bolsters and a trim cover make a sofa out of a single-bed-size mattress-and-spring combination. The cover hides the springs and protects the mattress from dust and soil. The bolsters narrow the mattress to sofa width and make it comfortable seating.

Divide your peonies for better bloom

The diary of a plain dirt gardener

Sept. 1 When the bright sun came up this a.m., it found this Plain Dirt Gardener in Denver, Colorado. I'm out this way on a long business trip. Maggie and David are along for the buggy ride and the scenery. Donald is back home by himself.

One of these days, and it may be real soon, you're going to be invited to a baby shower. With two or three million babies born every year the chances just have to be good. So when you do get that shower call, remember that one of the most practical and beautiful gifts you can take is the Better Homes & Gardens Baby Book.

THE MAN NEXT DOOM

"The test of a strong marriage," says Judge Wright, "is not whether a couple have stout differences now and then, but whether they come to understanding afterward, and even stouter agreement."