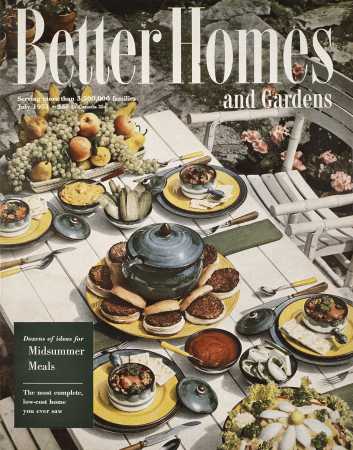 Our family lives in a house that lifts its face to the sun and opens every wall to the sky, the river, the trees, and the rain. Instead of burying ourselves in winter in the drippy, small-windowed, light-repelling home of our early-married years, we live now in encompassing light. Instead of peering fearfully through small panes at winter's violent moods, we now gaze through wide solar windows-- front-row seats for the ever-changing drama of the seasons.

What's wrong with this family?

A recently discovered hormone increases the life of cut flowers. This white powder, developed by the University of Illinois, goes under the scientific name of di-thio-biuret. It helps flowers take up more water. And has a tendency to make flowers mature more slowly, so blossoms keep their original colors longer.

How should you treat puppy love?

As one of four children who were always falling in and out of love, and now the mother of four youngsters of my own, I feel something of a veteran of what is known as "puppy love." And it seems to me that what mothers and fathers need most to realize is that such attractions are as natural as breathing. And that most of the mistakes we make in regard to them are due either to (1) a cheap, false, sentimental dramatizing of their significance; or (2) taking them as a grave and serious threat.

Have you heard the Latest Garden News?

After checking hundreds of reports of African-violets that fail to bloom, I find many persons don't recognize the difference between day length and light intensity. They think nine hours of light, if strong enough, is sufficient for good growth; they fail to appreciate the way trees or high buildings can reduce light intensity, particularly early in the morning or late at night.

You can't arrest elm disease by yourself!

Here in Greenwich, Connecticut, we have a tough fight on our hands. Origins of the battle go back some 20 years when Dutch elm disease, spread from diseased to healthy elms by bark beetles, was introduced into the United States with a shipment of imported veneer logs.

Completeness is the kef...

If you looked in the classified section of your Sunday newspaper and saw an ad which read "Here's a house with 35 features you won't want to do without," you'd want to see it, wouldn't you? You'd look at it even though you would feel certain it would cost more than you can afford. Well, you could be wrong.

It's where you put them that counts

Let's dress up furniture with fabrics

With your choice of fabrics, you can achieve any effect you want, complement any period of furniture, and develop any color scheme. You'll find several that will be right. How do you decide?

If you have a few minutes, I can tell you a story that may do you a lot of good. This is a true story that comes from the heart rather than the head, but it may make a good deal of sense.

Where the west is wild, but not too woolly

What would your family say to a vacation where it could: Ride horseback up the highest peak east of the Rockies? Inspect the richest gold mine in America? Pass buffalo along the highway and dine on them at night? Watch Indian dances and have its picture taken with a chief who fought against Custer? Set off dynamite to help carve a monument for the ages? Park on a log for a chuck-wagon dinner and cowboy songs around a campfire? Swim in spring water, 90 degrees warm? Peek in where Wild Bill Hickok met his Maker? Gaze at America's cloud-backed counterpart of the Egyptian Sphinx?

Four levels could be your answer

Keep things growing as you planned

You can get individuality at low cost

Fresh as a breeze and so good!

How to be a lazy-days housekeeper

Being "lazy" on hot summer days doesn't necessarily mean you have to have a messy house. You can take it easy and still keep the house looking presentable-- if you take a short cut that speeds your job along. Being lazy this way is just plain good common sense.

Cash in on your best recipe

There's $70 waiting for you cooks who send in the Cherry Desserts and Hearty Stews the judges consider best. A $10 check will go to the Cook-of-the-Month, and 20 other winners will receive $3. Eight recipes will be pictured in February's Cooks' Round Table.

How to can and freeze peas, cherries

It's time for berry jams and jellies

Build your own garage

New car too big for your old garage? Living in a garageless home and stymied by the high cost of housing your family bus? Here's a way you can have a frame garage without busting your budget.

The Badlands: Grandstand view of another world

Seeing the Black Hills without seeing the Badlands is like seeing New York without seeing the Statue of Liberty. This weird, eroded labyrinth of rainbow-colored peaks was described by one of the first white men to see it, General Alfred Sully, as "Hell with the fires out." Years later, Frank Lloyd Wright, the architect, called it an area where "communion with what man often calls 'God' is inevitable." You'll have to see it yourself to decide who was right, and it may be a split decision in your family.

Your pet and mine

This is the time of the year when we like to pile all the family luggage in the car and take off for the mountains or the seashore.

How to get more room outdoors

Check your newly planted trees and shrubs regularly ... make sure they aren't suffering from lack of water. Soak the entire root mass thoroughly when you water. Let dry moderately before watering again.

The diary of a plain dirt gardener

July 5 Home by midafternoon from a business trip, and promptly wife Maggie took me on a grand tour to see what a fine job she and son David had been doing of the gardening. Most everything looks just jim-dandy.

A good bet for outdoor building

You're missing a good thing if you overlook the features of "lightweight aggregate" concrete building blocks in your garden building.

If midsummer harvest of the vegetables you planted this spring means the end of your garden for this year, you're passing up a real chance to cut your food budget.