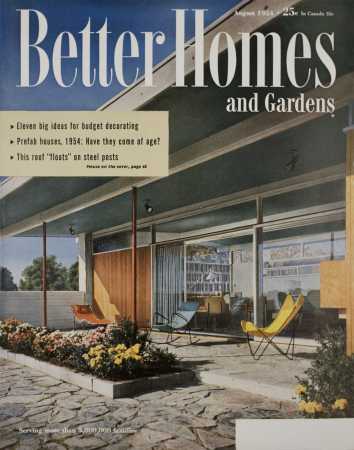 The importance of using enough water each time you water your garden is emphasized in experiments at the University of Missouri.

Feed everblooming roses for the last time this season. Sow pansy seeds. Plants will live through winter under a mulch, and give you early spring color.

The diary of a Plain dirt gardener

"Is there anything wrong?" asked Maggie, as she came to the door with cleaning mop in hand.

Migraine and fatigue. Migraine patients have too much "go" and not enough "stop." If they ceased being spendthrifts of energy, they might not have any more sick headaches. Accumulated fatigue is the one common factor that pulls a trigger on migraine, Dr. Sol Hirsch reported at a seminar of the New York City Department of Health.

Hot-day haven with plenty of extras

They could hardly believe what they had heard. The man said this was a prefabricated house. They had seen a few of them; during the war, those tight little boxes had mushroomed around ordnance plants and Army bases and reminded you that indeed there was a war on. But to compare them with this house was like putting a horseless carriage in the same class as a '54 convertible because they were made by the same company. If this was what was rolling off the housemakers' assembly lines these days, why hadn't someone told them about these new prefabs?

More than a century after the close of the great gold rush of 1849, the vast Western wastelands of canyons and catwalk ridges again know the tread of prospectors' boots and the tap of a miner's pick.

Here's how to wear your flowers

The construction itself is news in Five Star Home No. 2408. Here's the simplest enclosure of space-- "post and beam"-- with roof supported by beams on columns.

Good news for your decorating dollar

To the rescue of cluttered closets

You couldn't ask for more luscious eating than you see across the page. So revel in the fruits of the season. Choose a variety-- serve them in their natural glory, in combinations, and in gelatin or frozen desserts.

Money for your recipes

Is your furniture arranged for living?

When you're looking for ways to make your home more comfortable and attractive, look for this seal. It identifies the Better Homes & Gardens Home Planning Center, where you can get personal counsel on your home-planning problems.

Our Junior is the only boy on our side of the street who doesn't have one of those new blue-and-white, polka-dot shirts. It didn't seem quite fair until his mom mentioned that he's the only one with a big patch of blueberries and a new catcher's mitt.