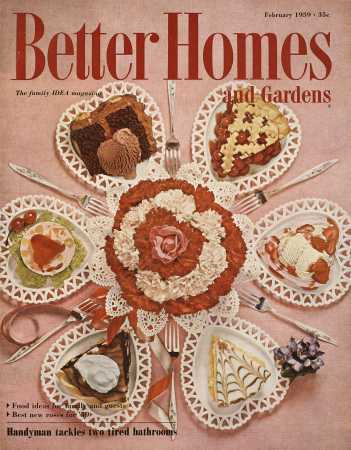 How do you know you're not a diabetic?

Two million Americans have diabetes-- and at least half of them don't know it. Because they've failed to get the simple physical checkup that would reveal its presence, one million men, women, and children in this country are totally unaware that they have a disease which, if uncontrolled, might endanger their lives. Besides these two million known and unknown diabetics, there are 4,750,000 people living in the United States today who will develop the disease.

Why the right hand is dominant with most people (over 88 per cent in our society) is not known. Animals do not appear to prefer one paw to the other, and early humans were more nearly ambidextrous than are their descendants.

Plan your decorating before you remodel

What about COLLEGE on CREDIT?

Anyone who follows the giddy fortunes of higher education must have detected, in recent months, the growth of a curious inconsistency in America's attitude toward its colleges. Even as the air rings with shrill charges of second-rate schooling, we can see an increasingly fierce determination among the discontented to enroll their own kids anyhow.

Plastic bags: Save all polyethylene plastic sacks from packaged goods. They have many valuable uses for growing and storing plants.

When you look younger, you are younger

MANY WOMEN feel the 30th birthday marks a turning point-- the ending of youth and the beginning of what is called "middle age."

They made a good room even better

The warmth of Oriental for a Modern house

New ideas for any house

REACHING FOR THE SUN

We have done what no other generation could do. We have tamed the sun and put it to everyday use. In the past we've had to take the sun's energy second-hand.

YOU'RE LUCKY to be buying roses today. Stems are stiffer, foliage is heavier, and colors are clearer and certainly more fade-resistant than in the roses that your grandmother and grandfather knew.

Money for your recipes

Give your Traditional room a new lease on life

These give your table a smart new look

Personal help in planning, decorating and furnishing YOUR home

Look for this Better Homes & Gardens "Home Planning Center" seal when you're looking for ideas to help make your home more comfortable and attractive. It identifies leading stores who feature personal counsel on home planning, decorating, and furnishings problems.

Ingenious ideas for an attic room

Party fun for your youngsters

Parties for children need not be expensive. Nor need they wait till the young host's birthday. A child whose birthday is in the summer will enjoy having a party during the school year, for then it's easier to assemble school friends.

The diary of a Plain dirt gardener

Feb. I Foolish, futile February is here. If I were king or head man in these parts, I'd just abolish the month as unnecessary. All it does is delay things so we can't get out and get busy. Just have to sit indoors. fume and fret.

We all got home from school and work without mishap on the day of the big blizzard. As dark fell with the soft whiteness, we realized we were snowed in for the night. Then, by good luck, a laden branch fell across our telephone wire, and we were shut off from that intrusion. I suddenly and firmly announced that neither radio nor TV would be turned on : we were going to experience an evening at home alone, a family together.