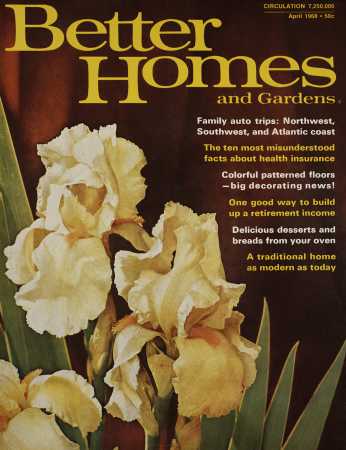 HOW GOOD A BUY IS TERM INSURANCE?

SHOULD YOU SAVE WITH CERTIFICATES OF DEPOSIT?

The big appeal in commercial bank certificates of deposit-- also called savings certificates, investment certificates, income bonds, and savings bonds-- is their high rate of interest. The interest paid on them runs from 4 to 5 percent, a cut above the 3½ to 4 percent paid on regular commercial bank savings accounts-- and comparable to the 4½ to 5 percent interest that is paid on passbook accounts by mutual savings banks and savings-and-loan associations.

WHAT'S THE BEST WAY TO BUILD A RETIREMENT INCOME?

If you run a business (unincorporated) or work on your own in a profession or trade, there's now a very attractive way to build your retirement fund with tax deductible dollars.

Dial the speed you need for any job or material. The solid state speed control on this sabre saw lets you dial any speed up to 3,000 strokes per minute, with just a flick of your thumb.

A GLOSSARY OF GLASSWARE

Glassware has the charm your table can't live without! Anything you serve seems elegant, when your dinner table sparkles with the look of a lighted prism! And the good news in glassware is-- today the "right" look can be lustrous-color --as well as crystal-clear!

A bird in the hand may be worth only two in the bush, but a rare bird cage in hand could be worth a thousand dollars or more. For the truth is that bird cages are no longer strictly for the birds. They're now for the collector, too, and the search for early ones, including many ornate types, is on in earnest.

PLANNING TO TAKE YOUR DOG ON A CAR TRIP?

If you're debating whether or not to take the family pet with you by car, here are a few questions you should ask yourself before making the final decision.

PUT YOUR WALLS TO WORK

WHAT YOU SHOULD KNOW BEFORE HAVING YOUR CAR PAINTED

If chipped paint, surface rusting, exposure to the elements, or parking-lot scars have left your once shiny auto a shabby looking veteran, a new paint job may be in order.

BETTER GASOLINE MILEAGE DEPENDS ON YOU

In most cases, poor gasoline mileage can be largely attributed to the way you drive, and the maintenance you give your car.

HOW TO CONCEAL A CLOSET

Put a pattern on your floor and decorating ideas spring into action. Just like that-- you have the basics of a decorating scheme: color, pattern, and texture. It's really as simple as developing a decorating theme from a fine painting, a patterned fabric, or wallpaper.

When Better Homes and Gardens asked a number of leading architects to explore fresh and creative approaches to the problems of present-day living, they responded with this series of remarkable houses. You'll be seeing the others in months ahead.

SANTA FE AND THE OLD WEST

Hundreds of years ago, Spanish explorers combed New Mexico's highlands and deserts for seven legendary cities of gold-- where natives ate from gold dishes, sailed in gold-trimmed canoes, and drank from silver goblets. Today the seven cities are still waiting to be found, but on this tour by Editor Peter Lindberg you will find other treasures, just for the looking: mesquite and pine-cloaked mountains rolling up from vast desert land; colorful cities that still boast their Spanish and Indian heritage (handmade jewelry to incendiary Mexican food); ancient cliff dwellings and sun-baked Indian pueblos; Carlsbad, one of the world's largest caverns-- and a sea of shimmering dunes called White Sands.

A NEW KITCHEN IN EXACTLY THE SAME SPACE

A gardener's calendar of color

In January, February, and March we presented spring- and summer-flowering plants in sequence of bloom. Nowwe'll showyou our selections of shrubs, bulbs, perennials, and vines to brighten your garden from late summer right up to frost. Next month we'll explain how to place and combine plants for maximum effect. Clip and save all five installments for a quick reference on color planning your garden.

BUILD YOUR CHILD A MINI-GYM TO GROW ON

HOW TO STORE WINTER WOOLENS

Follow this easy four-step method. But first, to safeguard your home against moth or carpet beetle invasion, keep dust from accumulating under beds, in closets, around baseboards and corners-- the favorite breeding places for these insects.

HOW TO MAKE A DUST RUFFLE

Want to add a decorative finish to the most important piece of furniture in the bedroom? Then add a dust ruffle and let the flounce coordinate with a boxed bedspread or coverlet.

A SEE-THROUGH CENTER FOR WORK AND PLAY

You don't need a cellar to store wine properly. Just keep bottles away from direct sunlight, extreme temperatures, or vibration. Store corked bottles on their sides so liquid covers the bottom of the cork, keeping it airtight.

SMALL APPLIANCES RIGHT WHERE YOU NEED THEM

GIFTS FROM YOUR KITCHEN

It's a delightful experience to share food from your kitchen with neighbors and friends. Cooking, which might otherwise be routine for you, becomes filled with a certain excitement. Your thoughtfulness might also inspire others and set into motion a pattern of good neighborliness.

... small fruits. Raspberries ... one of the delicacies that ... home garden can so well provide. The fragile fruit should ... allowed to ripen on the canes ... then be picked gently. ... baskets are preferable to larger containers in that ... berries are not so subject to ...

HOW TO ORDER MATERIAL FROM THE MAGAZINE

SHUTTERED WINDOWS FOR STYLE AND SERVICE

Have another look at those problem windows and think shut ters! Shutter window treatments are hard to beat and for lots of reasons. They add character and architectural interest to a room, they're inexpensive, and they give you extremely versatile light control. On top of all this, shutters are easy to install. Check out the great looking windows on this page, then read on for step-by-step instructions on put ting up shutters at your house!

HOW TO SHOWCASE A STUDIO BED

Discover the fun and convenience of shopping mail! You can order with complete confidence ... of the items shown: each company will ... your money if you're not delighted.

I am informed that our house will have to be painted this year. Apparently my antique-loving wife feels weatherbeaten charm is for interiors only.