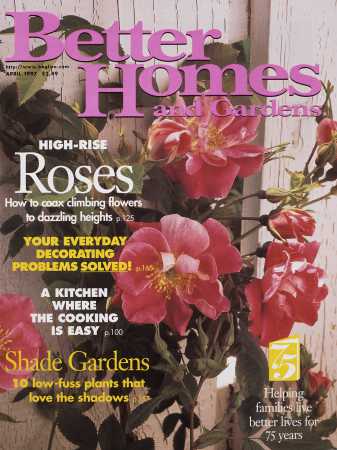 Beautiful fabrics and ease of construction are the common denominators for these tailored window shades. With a relatively small investment of time and money, you can create the look of expensive custom treatments.

For sheer curtain treatments that are a breeze to make, grab some ribbons and lace them up.

Furniture legs are important eye-catchers in any room. But it's just as important to know where to draw the line on too much leg. Discover one lesson of fashion: A little fabric goes a long way to add mystery, saying more by not telling all.

It comes as no surprise that a home built in 1923 lacks a few modern amenities. In the case of Betsy and Dr. Donald Hohman of Illinois, their Dutch colonial had three plain-as-vanilla bedrooms.

You hear it from your mom, Aunt Marj, and the lady next door: "My children were all trained by eighteen months-- I just can't understand why your child is still in diapers."

High school students learn real-life skills in programs that prepare them for the world of work.

Air bags are not soft, fluffy pillows. They save lives, but they car, be deadly to kids when they explode from the dash at up to 200 mph.

Break the Link Between Back Pain and Golf

This spring, give your golf game some respect, and your body may thank you. "Recreational golfers usually don't consider golf a sport, and they don't condition and stretch for it," says Betsy Voyles, P.T., who teaches a golf wellness program in Chicago.

A PITCH FOR FITNESS

EXERCISE PERKS UP PEOPLE WITH HIV

Tea is back. Well, tea never actually left-- it's still the most popular drink in the world. Consumed in record amounts, tea is now riding the coattails of the espresso boom into the limelight in the United States. Aiding its popularity is its perception as a healthful beverage. Often "prescribed" for illnesses such as headaches, premenstrual tension, colds, and flu, scientific research does, in fact, show that tea contains elements which may make it a disease fighter.

The corollary to the axiom that "work expands to fill time," might be "stuff expands to fill space." So, if you're running out of room in your rooms and find yourself fighting clutter in your closets, there may be a place in your life for a few multipurpose storage containers. These inexpensive organizers cost between $10 and $50 and include everything from simple plastic boxes to specialized containers with drawers and trays designed to help organize everything from toiletries to tools.

Bugs aren't the only intruders you want to keep out of your home. Your list probably includes burglars and blistering sunlight, too. If so, one surprisingly simple solution will help in all these cases: screening.

Homeowners and interior designers spend hours picking out tile and making sure their designs are just right. But many don't think twice about the glue that holds their ideas together. Grout is grout, right?

Because it takes time to cook up a renovated kitchen, Mel and Bunny Shaw let their plans stew for two years. The results are scrumptious.

Before you become a remodeling do-it-yourselfer, reap significant savings by being a buy-it-yourselfer. No architect, builder, or designer can spend your money as frugally or with more creativity than you.

Why Buy a New House?

Old houses have their charms. But if you want a spacious home with an open floor plan, state-of-the-art technologies, and low-maintenance comfort, put new construction on your shopping list for these reasons:

If you have a deck, there's little doubt that you will eventually run into problems as time and weather take their toll on the materials. But making minor deck repairs may be easier than you think. Here are some tips for easy do-it-yourself repairs.

The best deck design is often the simplest. Bold, clean planes play well against nature's rich tapestry of shade, color, and texture. Homeowners Judy and Dave Rogoway crafted an elegantly simple cedar deck that hugs the tree trunks under broad swaths of dappled shade and cascades gently toward the lawn and the house.

Up on the Roof

Roofing is a job for the pros. But how do you know when a contractor is truly professional? Consider these ups and downs before hiring a crew to replace your roof.

To celebrate the 75th birthday of Better Homes and Gardens magazine, we've had this charming rose grown exclusively for our readers.

To add another perspective to flowering vines, think of them as a peculiar land of perennial, or annual, that grows really, really tall.

Our Shade Gems Collection contains the three Hosta varieties shown in our story on pages 157 to 162. From Carroll Gardens, the collection includes one each of: Sieboldiana Elegans (a large species with gray-blue leaves and dense clusters of flowers soaring 3- to 4-feet above the foliage), Shade Fanfare (a medium-size species with light green leaves with yellow margins and lilac-colored flowers), and Kabitan (a very small species with ruffled yellow leaves with dark green margins and purple flowers).

A Wall of Flowers

Enter the exotic world of ornamental onions-- the alliums-- where bulbs bloom in summer, and flowers range from low-lying yellow asterisks to 4-foot-tall purple pompons on pylons. Some of these gardening exclamation points bloom almost as long as they are tall, filling in the garden from May to July with gorgeous globes approaching the size of blossoming volleyballs. If alliums are new to you, you must try these landscaping punctuation marks-- period.

Even nearing the height of a South Carolina summer, John Elsley's yard feels cool and sheltered. Native oaks cast a protective shade around his white brick home, like a comforting arm around the shoulder. And underneath this reassuring canopy lies a garden-- a woodland cocoon to ward off the intrusions of a residential neighborhood, a mystery of shadow and light and color, a garden where the loudest sound is not traffic, but birds hopping on mulched paths.

If you think the folks on our staff live in picture-perfect homes, think again. We've got our share of decorating problems (er, challenges). In fact, an office poll turned up familiar questions-- the same ones we hear from you. Here's how we tackled them.

At Home in the Vineyard

As sure as grapes cling to vines, Marilyn and Bob Johnson's new home has deep roots in the vineyard that surrounds it. After retiring, the couple packed their bags and headed for the California countryside to enjoy the outdoors and savor the fruits of their labor.

With each recipe, we give important nutrition information. The calorie count of each serving and the amount, in grams, of fat, saturated fat, cholesterol, sodium, carbohydrates, fiber, and protein will help you keep tabs on what you eat.

If you enjoyed the Health feature on pages 12 to 76 and the Parenting feature on page 50, here are two books that will give you more information on these important subjects.

Computers are so cool. Together, you and your computer can play games, travel the globe, and chat with cousins in another state. Plus you can make so many awesome things. Turn the pages for craft ideas you can make on your computer.

The man next door

After watching the season's first baseball game, Dr. Bob Hannelly couldn't help but notice that while 18 players were getting a workout, it was the 15,000 people sitting in the stands who needed the exercise.